I realize I sounded a bit like a whiner in Part I when I was talking about how the different closure ripped up my cuticles or knuckles. I know, in the heat of the moment, I’m unlikely to feel any cuts to my hands, and the important thing is to get to my gun and get a good master grip. It might seem like a silly thing to take into consideration when looking at a purse, but it’s worth thinking about. Let me explain: in order to draw effectively, you must practice. If practicing causes physical damage/pain, guess what you’re not going to do? You got it, practice.

I’ve been on a weight loss journey for the past year, so I’ve shrunk out of my Hip Hugger and haven’t wanted to spend the money to buy a new one, since it’s likely I was going to have to replace it again. Being summer, I lived in workout clothes, which meant I wasn’t wearing pants or shorts with belt loops for an IWB or OWB holster. Without a belly band that fit, I’m ashamed to say, my daily carry habit dwindled to zero. It was rare that I had a gun with me.

I’ve never been one to carry a purse (other than to the movie theater, to carry my ‘illegal’ candy), so it was a change. It’s still a conscious effort for me to remember to grab my purse on the way out the door. However, I love that I not only have my gun, but I have my pepper spray, flashlight, knife, and IFAK. I like having “options between a harsh word and a gun”.

Vicki pointed out that in the winter, when we carry on-body, sometimes the gun is harder to access because of all of our layers, but with a purse, we can just slip it on over our coat. Living in Colorado, it’s not unusual to wear at least three layers: shirt, vest, coat. I’d always leave my vest unzipped and only snap my coat so I had easy access to my gun if I needed it. When the wind is blowing, that’s not very comfortable. It wasn’t something that I’d put much thought into, but I’m looking forward to being able to zip up my winter coat this year.

I intended to carry the Slim purse for a month and then switch to the bigger one (the Tour bag), but I like the Slim so well I haven’t made the switch yet.

I’ve practiced until I’m comfortable with the Slim, but haven’t spent enough time with the Tour to be entirely confident with it. It’s big, but the thing that is a bit concerning to me is that the gun pocket is the middle pocket, and I’ve found that the zipper takes a bit more focus to find and unclasp than the Slim. If I overload the large pocket, which is closest to the body, it tends to lean outward, semi-obscuring the zipper on the gun pocket. 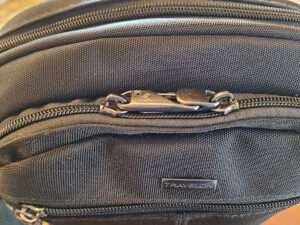 Part of me wants to say that I won’t make the change to full-time purse carry, but a big part of me is calling myself a liar. It’s just so easy, and I understand why so many women do it. I do feel more comfortable with on-body carry, but find that I am far more consistent in carrying in a purse. I don’t have to dress around the gun, or make sure that I am wearing pants with a belt. Not to mention, urban camouflage is kinda awesome. No one looks twice at a woman’s purse.

1) You must keep your purse under your control at all times. This means not leaving it on your chair, or in a shopping cart, or laying about where unauthorized people can access it (not just kids, but anyone who shouldn’t have access to a gun).

2) With a lot of practice, a sub-two second draw is possible. I’m not sure, as a middle-aged, unassuming woman that I look like enough of a threat to need a sub-two second draw. Though with a purse being such good urban camouflage, it is easy enough to fake as though you’re getting your money/wallet/whatever out of the purse while accessing your gun.

3) Purse snatching is a thing. Carrying cross-body makes it more difficult to snatch a purse, but it also “attaches” you to the purse snatcher if they attempt it anyway. Being willing/able to fight for control of the purse is necessary. It’s not just your ID and money in there, but your gun, and you must fight as hard to keep control of your purse as you would if someone were trying to disarm you while carrying on-body.

4) Kathy Jackson of The Cornered Cat had a valid concern about the zipper “lock”:

My concern with locking zippers is that they are a safety issue. Not in terms of getting to the gun in a hurry (although there certainly is that) but more in terms of human behavior: people tend to leave their purse places they should not leave the purse, because “it’s locked“.

And there are other dangerous things inside a purse, other than the gun.

It just tends to result in people being less aware of safety than they otherwise would be.

I’ve been careful to put the work “lock” into quotations to imply that it’s not really a lock and does not magically turn your purse into a gun safe, but Kathy’s absolutely right about using the term “lock”. The two zippers that hook together should probably be called a zipper clasp. (Clasp: (noun) a device with interlocking parts used for fastening things together.)

Despite the drawbacks (there is a give-and-take with any type of carry), I’m two months in to carrying my gun in a purse, and I have to tell you, I love it.

Shawntel is a certified firearms instructor, shooting enthusiast, and firearms blogger.  She blogs on many firearms related products and classes over www.thegundivas.com.  The article above cross-posted from the GunDivas.